Prevalence: subacute granulomatous de Quervain's thyroiditis (DQ) is a rare disorder among thyroid diseases. In our practice the ratio of DQ to Hashimoto's thyroiditis (HT) is around 1 to 30.

Clinical presentation: in most cases DQ has a very specific clinical pattern. In a typical case a patient had an upper airway infection 3-6 weeks prior to onset of complaints. The symptoms are sudden fever, unilateral painful thyroid and radiating pain to the jaw or to the ears. Complaints caused by elevated thyroid hormones develop gradually over some weeks.
In around 20% of the cases the clinical presentation may be misleading. Both the neck complaints and the higher body temperature may be missing. In extreme situations, it is also possible that a simple US screening leads to the diagnosis of DQ.
One of the most important properties of the disease is its self-limiting behaviour. Each patient heal without any therapy but the time until a complete recovery may last for even a year. We have to be aware of the fact that our aim is to stop pain, fever and the biochemical consequences of the inflammation, but to the best of our knowledge, the therapy has no effect on the duration of the complete recovery. Therefore the patient needs no therapy in moderate cases.

Functional state: a typical three-step phase can be observed in most of the cases. First is the hyperthyroid phase within weeks after the onset of inflammation. This is followed by a hyperthyroid phase 2-3 months after the resolution of complaints. The last step is the complete recovery 4-6 months after the onset of the disease. This sequence can be interfered by the frequently occurring recurrence of the initial complaints. It is advised not to treat neither the hyperthyroid nor the hypothyroid phase, because we can cause more harm than benefit with thyrostatic or replacement therapy. The elevated thyroid hormone levels will get normalized after ceasing the cause of it, i.e. inflammation. If we prescribe thyrostatic drug, it has no effect on the natural catabolism of the elevated blood level of thyroxine, but will worsen the following hypothyroid phase. The administration of beta-blockers is sufficient in those patients who has severe complaints of the hyperthyroid phase.

There is no other thyroid disease than DQ where the US pattern is so deeply influenced by time. In the early phase (within the first 2-3 weeks) of the disease we can observe US signs only in one lobe of the thyroid. The affected lobe contains hypoechogenic areas with blurred borders and these areas are avascular on Doppler mode. The hypoechogenic areas may affect 5 to 80% of the lobe.

The contralateral lobe will be affected in most if not all of the cases even when the inflammation is stopped by steroids or ceases by itself (see case 35). Several weeks after the onset of the disease the vascularization will be normalized in the hypoechogenic areas. The complete normalization of US pattern may last for one or two years. It is worth to follow the patient not only until the biochemical parameters will be normalized, but until the US pattern do. In around 2-5% of these cases, the hypoechogenic US pattern remains abnormal. We suppose that in these cases the patient had an underlying autoimmune disease independent from DQ.

The diagnosis and differential diagnostic of de Quervain's thyroiditis

In a typical case, an experienced thyroidologist is able to diagnose the disease with great probability even in the absence of US or cytological results. The combination of a hard, painful thyroid with fever, elevated sedimentation rate and thyroid hormone levels are almost 100% diagnostic for the disease. The differential diagnostic involves practically the suddenly developed, inflamed thyroid cyst and theoretically the anaplastic cancer of the thyroid, too. Nowadays, the performance of US is mandatory and will exclude the possibility of the former problem.

If the clinical presentation is not specific, we are faced with difficulties in the diagnosis unless we are more experienced and the clinical presentation is quite unequivocal. Hashimoto's thyroiditis is the most important disease to be examined in differential diagnostic. The elevation of anti-TPO antibody to a high level (over 500 U/mL) decides that the patient has Hashimoto's thyroiditis but does not exclude the possibility of a DQ, too. The elevation of a sedimentation rate over 40-50 mm/h is extremely rare in active phase of HT, as fever is. If we have any doubt, FNAC has to be performed. Also, if we could not decide after a complete diagnostic evaluation, the follow-up of the patient terminates the issue. We do not cause any harm if we administer steroid to a Hashimoto-patient with neck complaints, and inversely we do not cause any harm to a patient with no or only mild complaints left untreated.
Differential diagnostic of hyperthyroid states. In patients without clinical signs of inflammation, the elevated thyroid hormone levels (subclinical hyperthyroidism or mild biochemical hyperthyroidism) may cause differential diagnostic problems. The differential-diagnostics most frequently involves the so-called hashitoxicosis. Elevated aTPO levels or the US pattern are of great help. In certain cases DQ causes more severe hyperthyroidism. In those rare cases when the patients has no neck problems, the differentiation of DQ from Graves' disease is impossible on clinical background. On the other hand, the vascularization in most if not all cases of Graves' disease is increased while in DQ it is decreased or absent. The gray scale mode may also be helpful, but the patchy hypoechogenic pattern is of less significance in this situation because DQ is present with diffuse hypoechogenicity in around 20% of cases.
The wide use of US caused a new differential diagnostic problem. In patients with no or only mild complaints the US pattern may cause a serious differential diagnostic problem. This pattern highly resembles an observed one in papillary cancer. The hypoechogenicity, the irregular, blurred borders may raise great concern. Naturally, FNAC has to be done. On the other hand, the presence of multinucleated cells on the smear, is not a decisive sign in differential diagnostic because such cells are frequently observed in the case of papillary cancer. Nevertheless, in those cases of papillary cancer where multinucleated tumor cells are present on the smear, the cytological pattern is very cellular, and in such cases other cytological signs of the cancer are also present.

In a typical case the smear contains normal and degenerated follicular cells mixed with inflammatory cells. Among the inflammatory ones, there are multinucleated giant cells composed of epitheloid cells and thyrocytes. There is no necrosis or caseation. Nevertheless the cytologic pattern may considerably vary. The most pathognomic cytological

sign is the presence of multinucleated giant cells composed of epitheloid cells. These can be found in more than 80% of the cases in the first 2-3 weeks, but less than 20% 6 weeks after the beginning of the disease. Because of the size, the intact granulation tissue cannot be seen in cytology but recognizable parts of this structure are occasionally found even in smears.

If multinucleated giant cells are present within an inflammatory background in the smear, the cytodiagnosis of granulomatous thyroiditis is not questionable. For the differential diagnostics see  TABLE. Granulation around surgical thread and palpation thyroiditis may occur. The 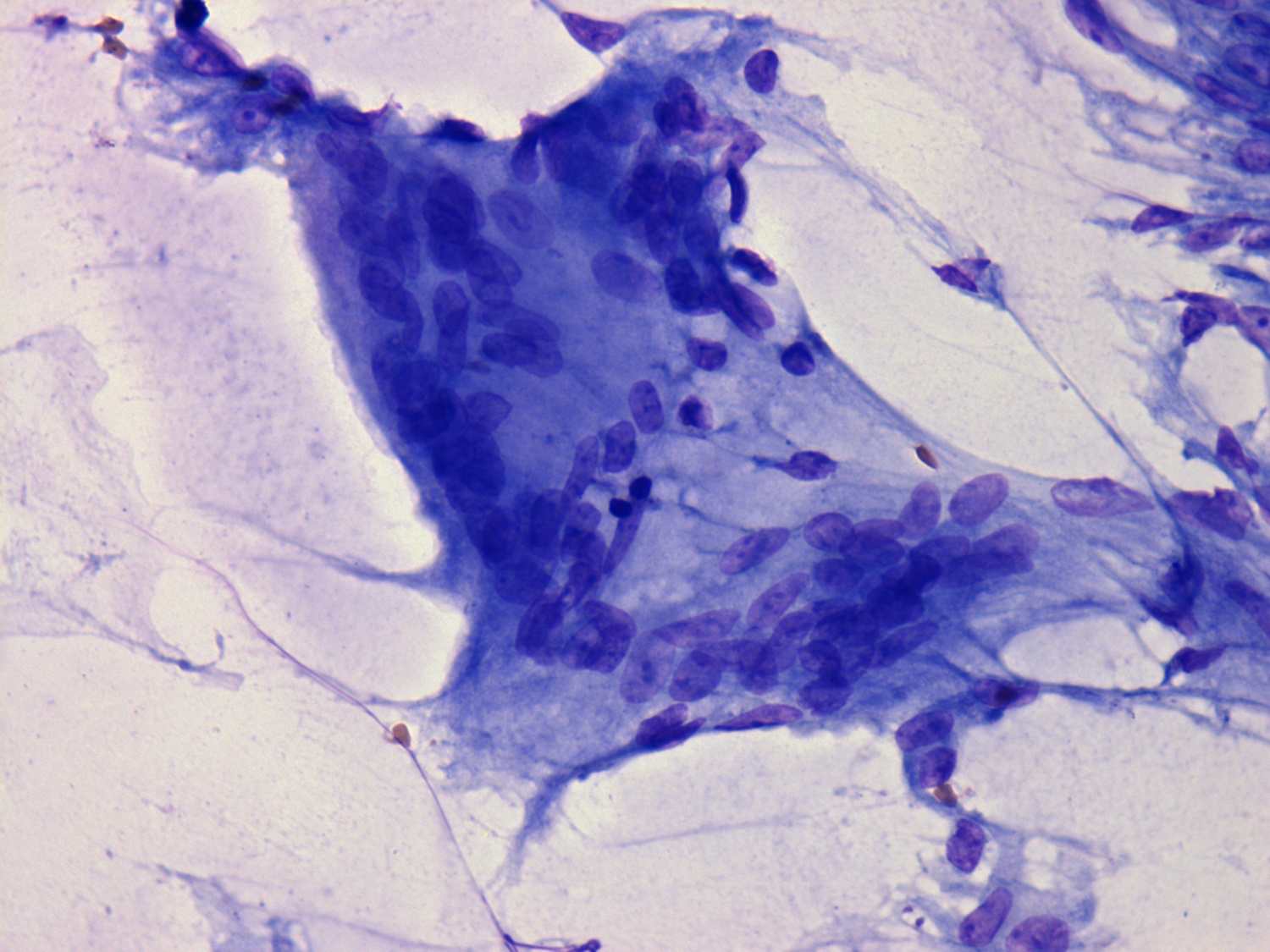 history of the patient decides the question in the former case, such granulation occurring in patients who have previously undergone thyroid or neck surgery. These patients present no fever, the ESR is not elevated, and pain, if present, is localized to the small, hard lesion, without radiating toward the neck or ear. Moreover, in these smears debris of surgical thread may be seen, a phenomenon which does not arise in cases of de Quervain's thyroiditis. In rare instances, lymphocytic thyroiditis may produce a similar clinical and also a cytological picture with multinucleated giant cells. On the other hand, epitheloid cells are rarely present in chronic thyroiditis.

If multinucleated giant cells are not present in the

smear a definitive cytological diagnosis is not possible. If we are aware of the history of the patient, a combined clinical-cytological diagnosis in cases with a typical clinical presentation of de Quervain's thyroiditis encounters no problem. The only differential diagnostic problem occurs in cases without a clear-cut clinical presentation and without multinucleated giant cells in the smear.
Two other possibilities must be considered. The first is anaplastic carcinoma of the thyroid with a concomitant inflammatory reaction. This is a very rare possibility, but in patients aged over 60 years it must be considered. If the cytology is not decisive, it must be repeated, because no other tool is able to differentiate between the two types of lesion. The clinical picture may also be of help: in cases of de Quervain's thyroiditis, the first sign is fever, while in cases of anaplastic carcinoma with an inflammatory reaction, the first sign is the stone-hard goiter that suddenly develops, and inflammatory changes may develop only weeks after the development of the goiter.

Most of the differential diagnostic problems arise in to the other situation: is it subacute de Quervain's thyroiditis or subacute silent lymphocytic thyroiditis (Zimmermann 1986, Bianda 1998). Most of these problematic cases are of to the latter type. If the level of thyroid autoantibodies is elevated, this decides the question. On the other hand, no other decisive signs specific for either disease are available. If tests for autoantibodies are negative, the follow-up of the patients may be of help. In our practice, besides 609 subacute de Quervain's thyroiditis and 872 subacute silent lymphocytic thyroiditis cases, there were 60 cases where we could not decide on the type of the underlying disease at the first examination. On follow-up examinations, complete normalization of the US pattern favours the diagnosis of previous de Quervain's thyroiditis (this occurred in 9 of 60 cases), while persistent hypothyroidism is seen only in cases of lymphocytic thyroiditis (31 of 60 cases). 11 of 60 patients gave a clinical picture involving recurrent attacks of fever, and neck pain over 3 and 5 years, respectively. Steroid therapy, which has a dramatic benefit on patients with de Quervain's thyroiditis, had no effect in these cases. We have no clear-cut evidence, but in our opinion these cases are a form of LT.

There is long lasting debate in the literature whether non-steroid anti-inflammatory drugs or steroid would be the appropriate therapy for a patient with neck complaints. We favour the latter method. It is clear that steroid has a prompt effect, the neck complaints and the fever is completely resolved within 24 hours. On the other hand a 6-week steroid therapy causes more frequent side effects than a NSAID. However, all of these side effects are recovered completely after the discontinuation of therapy. Last but not least, although a patient notices more side effects during steroid therapy (weight gain, edema, moderate elevation in blood pressure and serum-glucose), but serious side effects are extremely rare. We have treated more than 600 patient with steroid within the last 2 decades and no serious side effects occurred, however, in the early years of our practice two patients occurred among 20 who had serious side effects by NSAID. One of them  had haematemesis and the other one had a bone marrow depletion. It seems obvious that the latest NSAID drugs have less and less serious side effects than the older ones. The other debate is that which patient has to be treated. Patients with no complaints require no treatment. (Be aware that the therapy has no effect on the duration of the disease.) It seems reasonable to prescribe small amount of NSAID for a patient with only limited complaints. If the complaints gets worse or did not end after a week, the use of a 6-week steroid therapy has to be considered.