Benign colloid goiter is the cytological presentation of a hyperplastic nodule. This is the most common lesion in thyroid cytology and histopathology. Most cases can be diagnosed without difficulty. However, even a low proportion of atypical patterns means a high absolute number of cases involving a differential diagnostic problem. In some of these cases, the combined use of US and FNAC is of importance in order to avoid unnecessary surgery.

As mentioned above, most cases of nodular goiters can be diagnosed by FNAC without difficulty. The most important feature favouring the diagnosis is the presence of colloid. A diffuse colloid background practically excludes the possibility of a malignant tumor in the smear. (A review of our false-negative cases revealed no cytological misinterpretation in those cases where a diffuse colloid background could be observed.) The smaller the proportion of colloid in the smear, the greater the chance that a non-characteristic picture will be seen and the greater the chance that a differential diagnostic problem will occur. Detection of the colloid in the smear is greatly influenced by the staining method applied. The major limitation of the Papanicolau method is in this field. The Wright-Giemsa method, and especially the hematoxylin-eosin method, is more suitable for the detection of colloid in the background. TABLE On the other hand, the nuclear details are visualized best with the Papanicolau method, and least well with the hematoxylin-eosin method. Combined use of the Papanicolau method and the Wright-Giemsa method may be of great advantage in this field.

The most frequent and most important pattern observed in connection with nodular goiters is the occurrence of cell clusters of various sizes and types. Two well-c 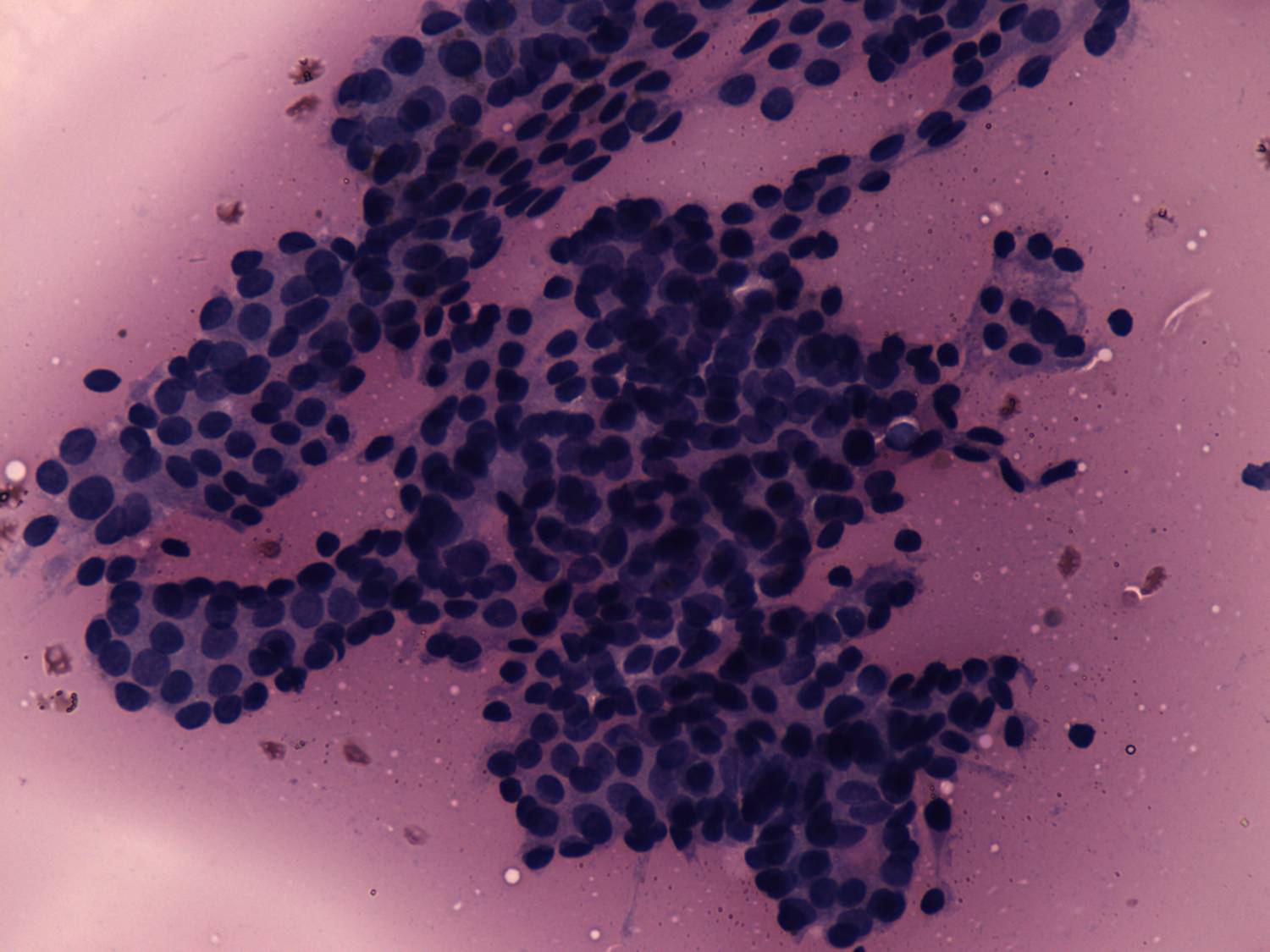 ircumscribed patterns may be seen. The first pattern is the honeycomb arrangement of follicular cells. These are monolayered sheets without overlapping of the cells. The latter feature is an important one as concerns a distinction of nodular goiter from papillary cancer.  Nuclear details are relatively well preserved in the honeycomb cell arrangement. The other pattern is the 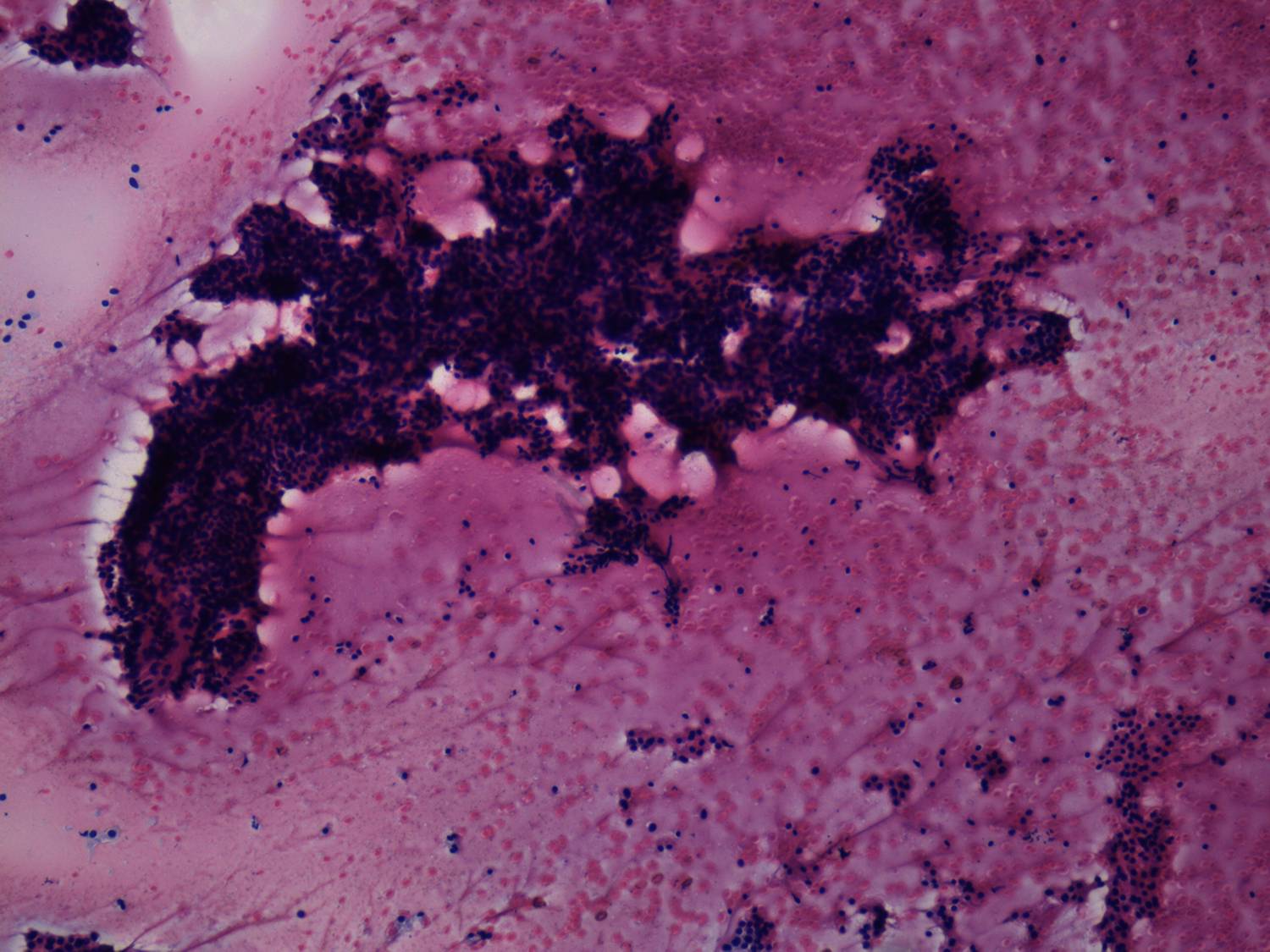 papillary frond. This is a multilayered, three-dimensional sheet of cells. The nuclear details cannot be interpreted clearly because of the overlapping of the cells. The edge of these papillae are not sharp in cases of nodular goiters. Even more important, the dispersed cells near a papillary cluster are pyknotic, without cytoplasm.  These features are of great help in the correct interpretation of papillary fronds. This is of great significance, because the nuclear details within these multilayered cell clusters are not well preserved. TABLE


Follicular patterns of various sizes may be observed in most cases of nodular goiters. One pattern causes no diagnostic problem: microfollicles aspirated in toto are 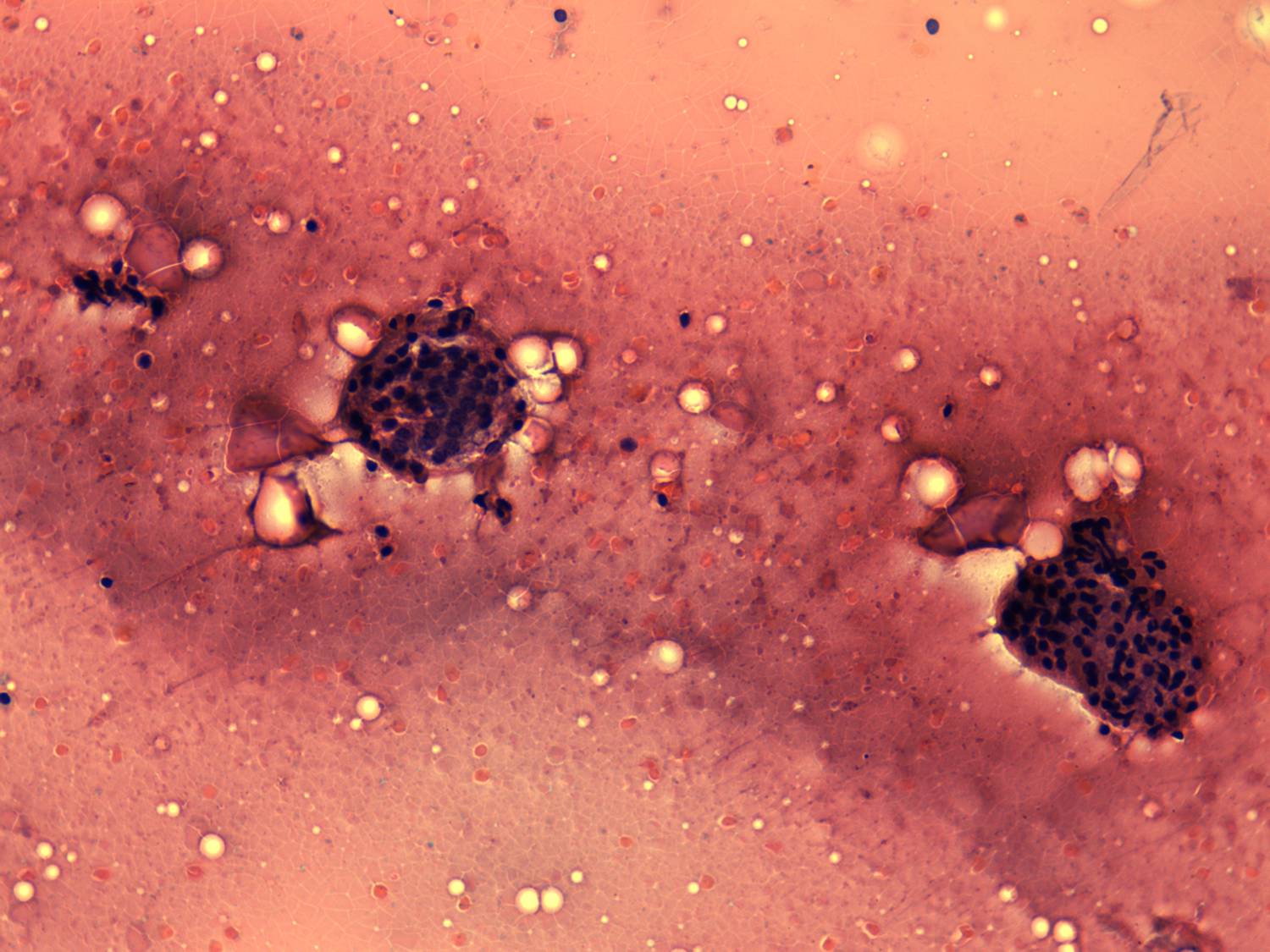 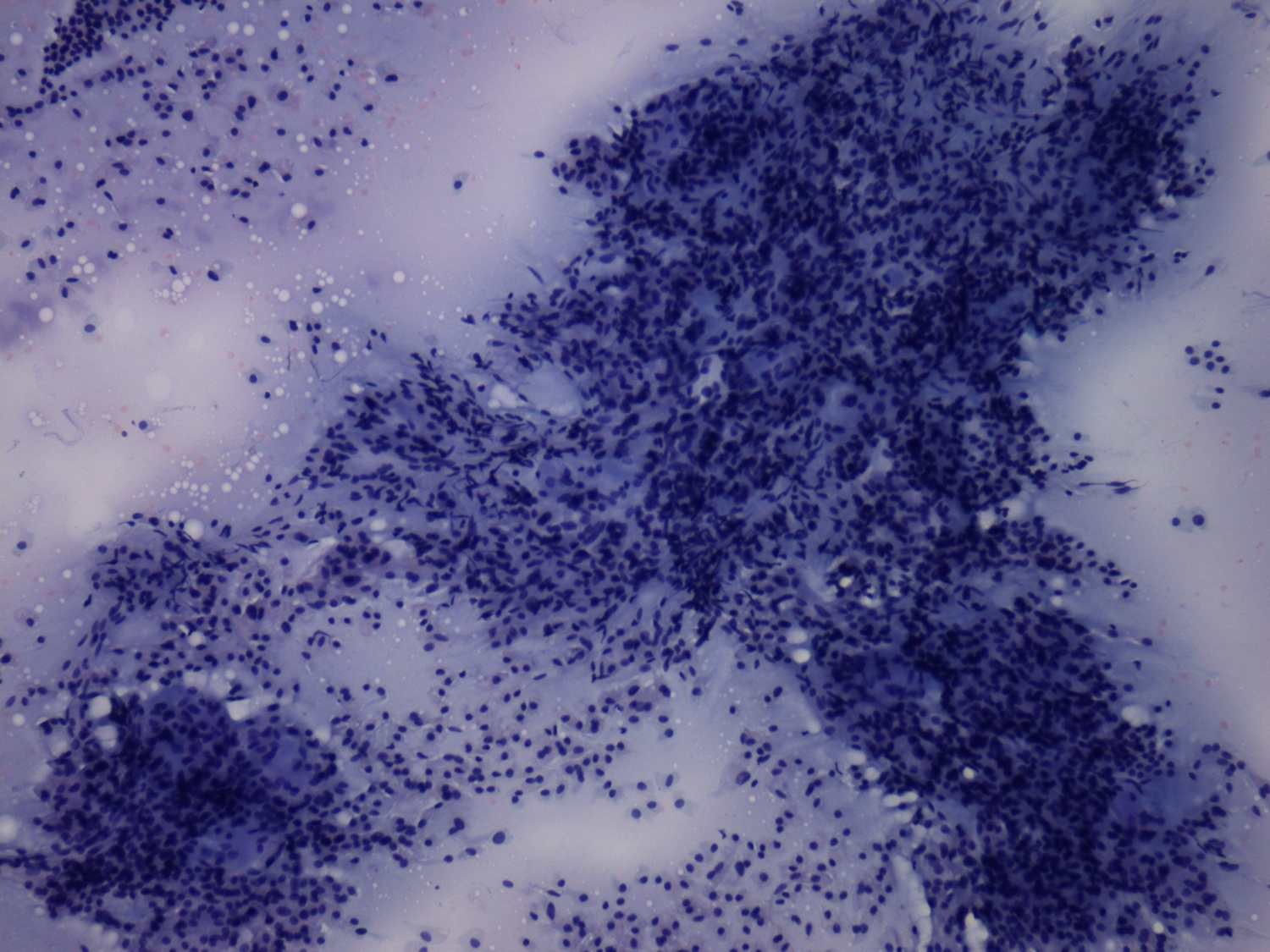 background is one of the most characteristic features in nodular goiters.  These cells may be pykcnotic or enlarged, and they may exhibit Hürthle-cell metaplasia. In a colloid background, the nuclear atypia of dispersed cells is of no relevance. Another example is the above-mentioned occurrence of dispersed cells near papillary fragments. The characteristic of these cells is of great relevance: in nodular goiters, these cells are pyknotic, a feature of great help in the correct interpretation of papillary fronds. Psammoma bodies occur rarely in smears from nodular goiters, but in these cases the possibility of papillary cancer must be taken into account (Riazmontazer 1991).

As regards the nuclear details, cells from a nodular goiter display great variability. In most cases, the cells are round, and of uniform size. Nucleoli may be seen only exceptionally, and they are not prominent or enlarged. If a great variability in size is observed, this may reflect hormonal alterations or degenerative changes, including the presence of focal lymphocytic thyroiditis. Thyrostatic drugs in the history, or isotope therapy for hyperthyroidism, may cause serious alterations in the 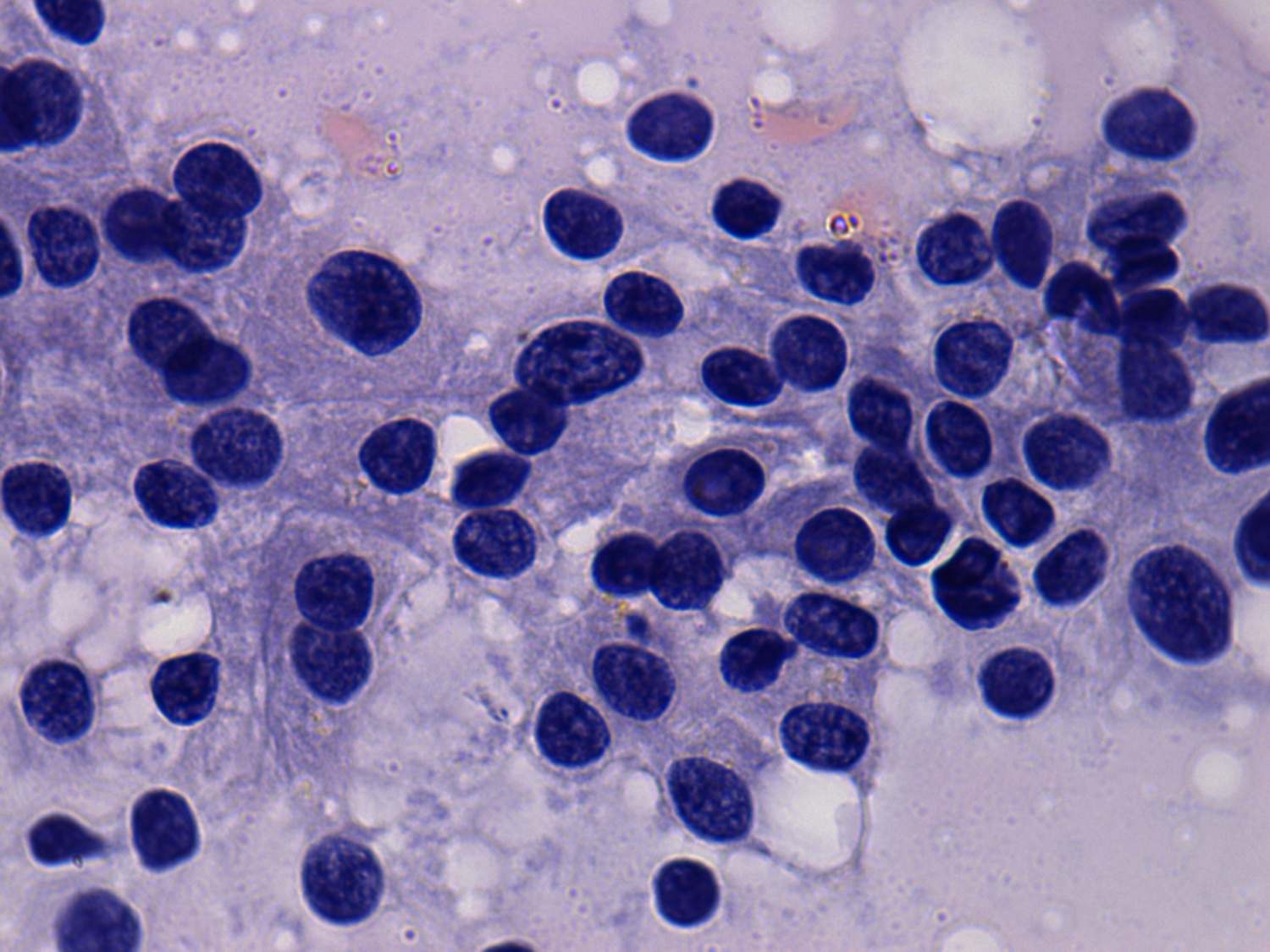 nuclei even some decades later. The nuclei in these cases are characteristically round, but may be greatly enlarged. As mentioned above, the presence of pyknotic nuclei is a characteristic feature of nodular goiters.
The cytoplasm of the cells is not well preserved in the smears. On the other hand, oncocytic metaplasia is 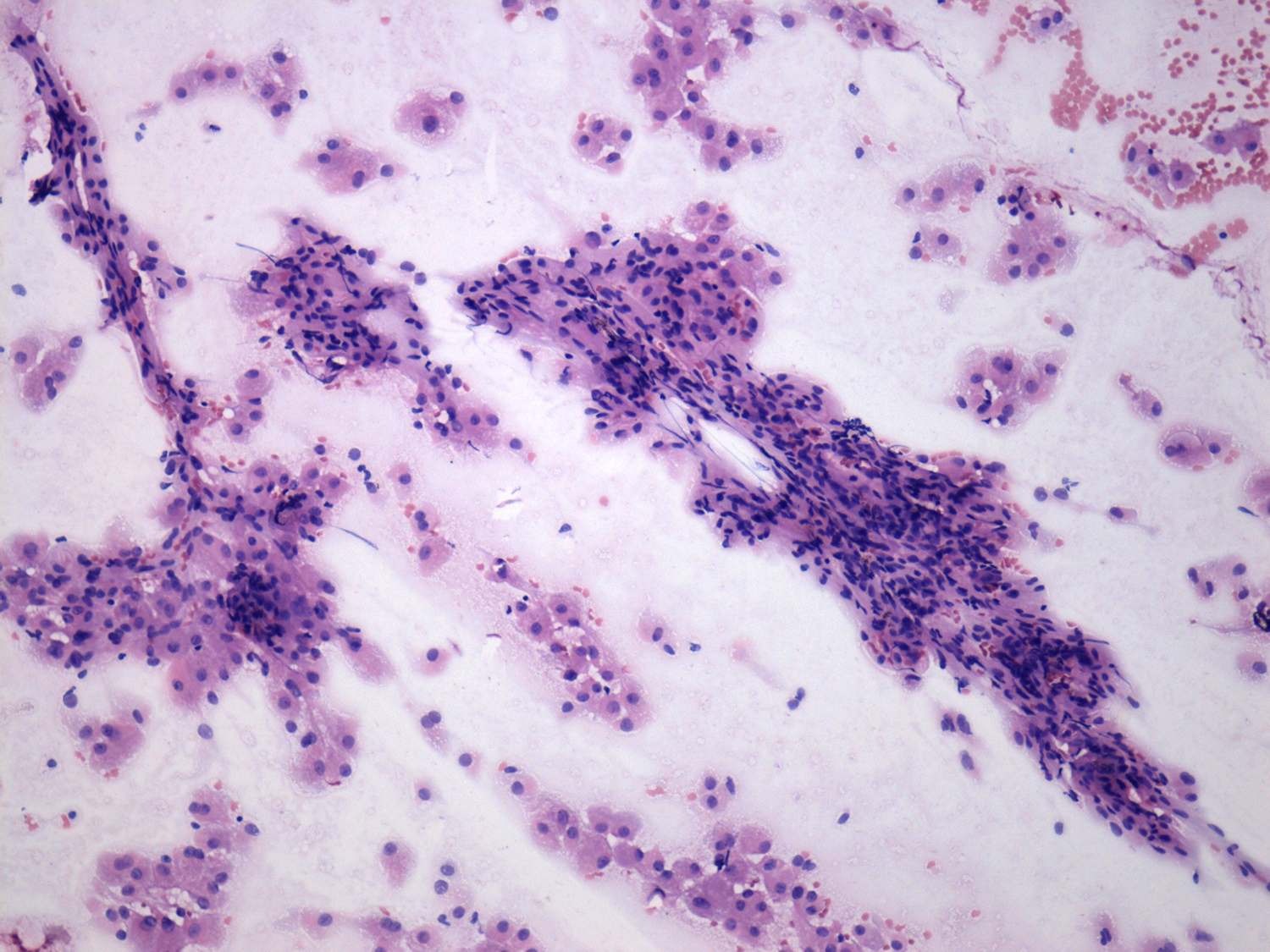 relatively often observed. In the rare cases where oncocytes are the prominent cell type, this causes serious interpretation difficulties. The arrangements of oncocytes, the presence or absence of prominent nucleoli and the presence or absence of colloid in the background may be of help. If oncocytes are arranged in regular sheets, nucleoli are not prominent there is and colloid in the background, the patient can avoid unnecessary surgery. But if any one of these three features is missing, the probability of oncocytic tumor is greatly increased.
Nuclear inclusions and grooves are relatively infre 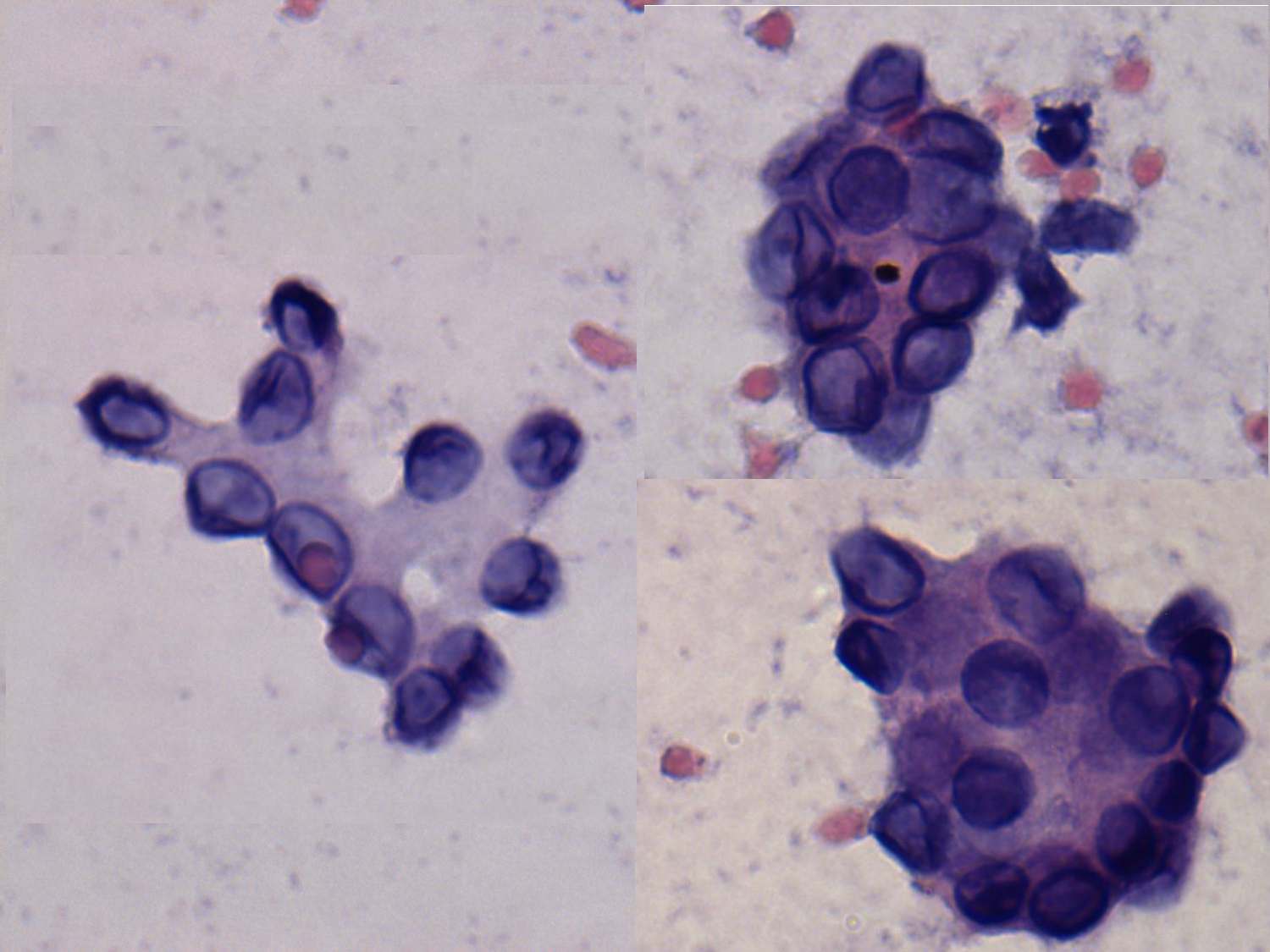 quent in cases of nodular goiters. Scattered nuclei (i.e. only 1 or 2 per smear) with these features may be observed in some cases. This has no relevance. However, if the number of cells with these atypia is higher, the correct interpretation may be difficult or even impossible. A great proportion of these patients are sent to surgery with the suspicion of papillary cancer, and

most of the cases prove to be nodular goiter with serious degenerative changes. The other type of this diagnostic problem with nuclear inclusions and grooves occurs in lesions later proven to be nodular goiter with focal lymphocytic thyroiditis. The nuclear atypia seen in lymphocytic thyroiditis is discussed in the relevant chapter. Here, we merely mention the possibility that in patients with nodular goiters, where focal lymphocytic thyroiditis also occurs, nuclear grooves can be seen. Even in cases where a significant number of lymphocytes are visible in the smear, the correct diagnosis may be difficult. And in cases where we are not aware of the presence of lymphocytic thyroiditis, the problem may be more serious.
Cystic degeneration is a very frequent phenomenon in nodular goiters. In cases where this is only limited and no cystic fluid can be aspirated, the correct diagnosis is not difficult: we can see the common picture of nodular goiters, with some cells with cystic degeneration. On the other hand, one of the most important limitations of thyroid cytology and one of the most important differential diagnostic problems in the evaluation of thyroid nodules is the differential diagnostics and management of thyroid cysts.
The occasional presence of multinucleated giant cells reflects degenerative changes and is of no relevance. On the other hand, the presence of even a small number of lymphocytes should raise the possibility of pre-existing autoimmune lymphocytic thyroiditis. Solely from the cytological picture, we cannot exclude the possibility of the latter.
The cytology of nodular goiters treated for hyperthyroidism is discussed in the relevant chapter.