Although the goal of this section is not to take stand on one or another surgical technique we have the unequivocal view that based on our current knowledge and experience, the choice of a surgical procedure is not subtotal resection but almost total or total lobectomy.

There are two possibilities. Firstly, the patient has a large solitary nodule. In such a case, the risk that this lesion would be a follicular tumor is much greater than in the case of a multinodular goiter. In the case of a follicular tumor, the risk of a follicular carcinoma has to be considered and can be excluded only by final histopathology. If we do not perform lobectomy, i.e. total lobectomy, the patient has to be operated again in case the final histopathology discloses carcinoma.

Secondly, in the case of a multinodular goiter the whole thyroid is diseased. If we leave significant part of the thyroid, we will expose the patient to a significantly larger risk of a reoperation years or decades later.

The only question that remains is that we completely remove the lobe, almost completely remove it or leave it intact. This is an everyday problem in the case of a patient who has a goiter requiring removal of one side of the thyroid and who has a diseased contralateral lobe with a goiter not requiring surgery. In such instances, there are arguments for and against the removal of the less diseased lobe. The former view includes the avoidance of a later reoperation and therefore avoidance of a second general anaesthesia and the latter includes the avoidance of replacement therapy with the psychological drawbacks of a life-long medication.

A significant part of surgeons have different opinions. Moreover, even nowadays around 30 to 50% of previously operated patients underwent on surgery in the era of function-indulged surgery and live their lives with a partially resected lobe.

Consequences of a surgical procedure - the operated lobe

Depending on the tissue reaction of the patient, small 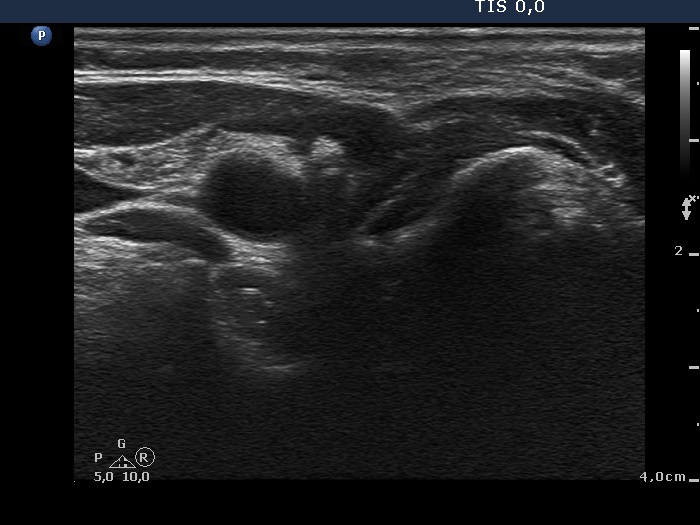 scars may develop even after the latest surgical techniques. The necrotic areas absorb over time, small coarse calcifications may develop. There is another important consequence of an operation: the structure of the non-influenced part of the lobe may alter in consequence of the changes in vascularization. Cutting a small vessel, new circulation system developing during the regenerative process influences the circulation of the intact part, too.

There are two consequences of the above mentioned processes on the echo structure. Firstly, the scar and the calcification appear as a circumscribed lesion. Secondly, a scar or a thickened connective tissue alters the echo pattern of the dorsal parenchyma. The changes in the vascularization may have a similar effect. In most cases, the echostructure of the intact parts 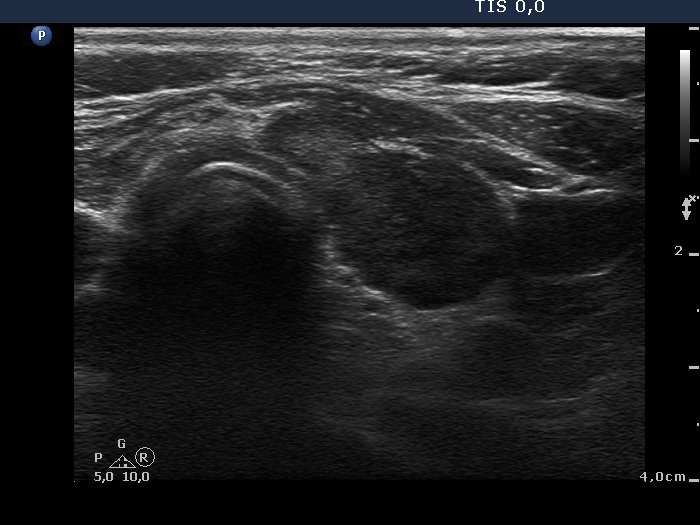 becomes more hypoechogenic. Moreover, changes in the vascularization may be different in various parts of the thyroid, therefore it may cause circumscribes ultrasound alterations: a homogeneous intact thyroid may appear in the form of a discrete lesion.

The regeneration of an operated tissue is a slow process which causes significant changes in the tissue structure and therefore in the echo structure, too. A rare characteristic example is the appearance of a thyroid tissue in an unusual localization. Small groups of thyroid cells spread during the surgery in the environment; they may stick to and survive first of all in the neck muscles. Years or decades later they may appear as aberrantly located thyroid lesions as great as 1 to 3 cm in diameter.

Consequences of a surgical procedure - the contralateral lobe

frequent phenomenon. It may be virtual, i.e. the consequence of the thickening of the capsule of the thyroid which may make the parenchyma of the thyroid more hypoechogenic. There may be another process which is not virtual: the vascularization may alter. We now that there are blood-, and lymphatic connections between the thyroid lobes, therefore the surgical procedures on one side may cause changes in the other unaffected side, as well.

The contralateral thyroid frequently increases in size in patients who underwent unilateral lobectomy. It is a natural consequence of an operation, because half the thyroid remnant has to produce double the amount of the previously secreted thyroid hormones.

Consequences of a surgical procedure on thyroid ultrasound pattern

All of the above mentioned processes may change the echo pattern of the thyroid. Some of these processes alter the echostructure of the whole lobe or the whole remnant, and some of these cause focal alterations. The main consequence is that a surgical procedure has multiple effects on the thyroid structure and therefore the ultrasound pattern, which is different in the case of every patient, are frequently life-long.

If we take into account the fact that the resolution of ultrasound is less than 1 mm, it is evident that we will find discrete lesions in every operated thyroid.

The thyroid years after the surgical procedure

In most cases of a total loebectomy muscle fibers 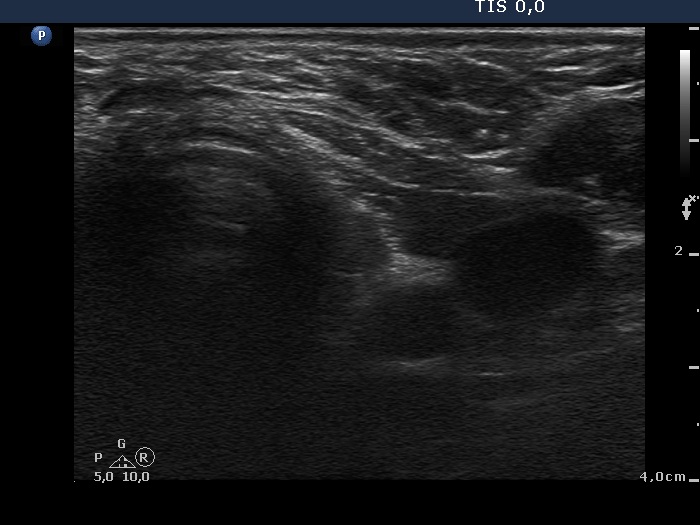 The term "recurrent nodule" is inadequate in most cases

How to interpret discrete lesions in an operated thyroid?

In the case of a partial resection, we have to be aware of the presurgical conditions of the lobe. If the surgeon removes only one or several larger nodules but not the entire or almost the entire lobe, discrete lesions previously present in the remnant will remain unchanged. Unfortunately, in the everyday practice in a significant number of patients, we are not aware of the presurgical ultrasound. In the case of a patient who did not undergo a preoperative ultrasound examination or who did not get a prudent and detailed description, we cannot compare a previous situation to a former.

And last but not least, the differential diagnostics of a discrete lesion counts too. A nodule in a pathological sense has a regular geometrical shape. In most cases, a nodule is well demarcated and therefore the borders of a nodule are sharp. A discrete lesion with a maximal diameter of less than 10 mm has practically no relevance at the time of discovery and may have minimal if any consequence in the future.

What is the goal of an ultrasound examination after surgery?

Regarding the first, the differential diagnostic of discrete lesions in an operated thyroid is more difficult than in the intact organ. If we are not aware of the presurgical conditions, a definitive differential diagnosis is frequently impossible. In such cases to denominate a discrete lesion as a nodule is a failure. Radiologists make that mistake very often. The thyroidologist knows that a 8 mm "nodule" has practically no relevance but the patient is not aware of this fact and therefore in many instances we cause absolutely unnecessary fear in the patient by the misuse of the term nodule.

Regarding the selection of lesions to aspiration cytology the situation differs from that of non-operated patients. We are faced with a nodule in a patient who previously underwent an operation which resulted in benign histopathology. The chance that a nodule in such a patient would be malignant is significantly lower compared with nodules in an intact thyroid. In fact, in the case of a multinodular goiter, the whole thyroid is diseased. Larger nodules were removed and smaller ones were left. However, except for an almost total or total thyroidectomy, we can found smaller nodules in the remnant in most patients.

The most important data is the volume of the remnant. This is the basis of the follow-up and this is the basis of the estimation of the risk of a reoperation. Also, this is the data which can be reproduced later in the course of a follow-up. The term decreased, normal, minimally or moderately increased thyroid has minimal, if any relevance and cannot replace the exact measure i.e. the 3 diameters of the lobe. Pay attention to the fact that a patient with a resected thyroid will live decades with this condition. He or she may have present dyspnea or difficulties in swallowing when getting older. If we were aware of the exact previous size of his or her thyroid, we could decide whether his or her new complaints are associated with a gradually increasing thyroid or not.